Life With A Puppy

Life with a puppy is fun, frustrating, exciting, exhausting and rewarding all at the same time. 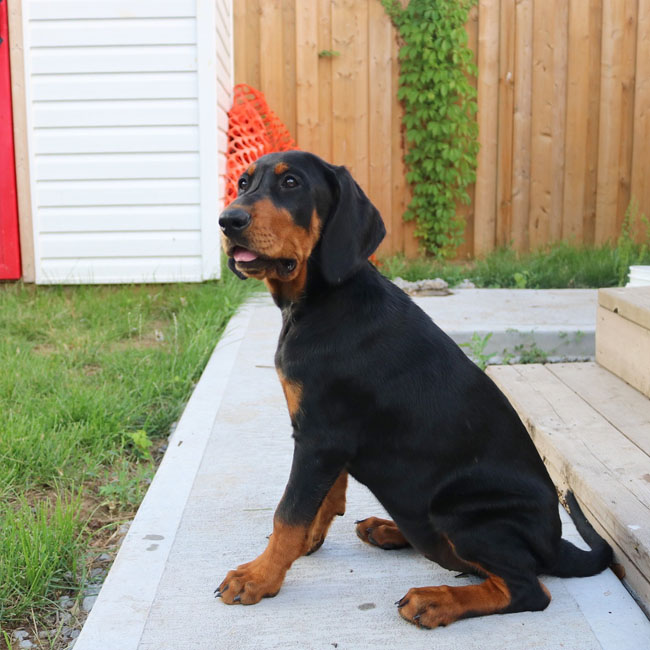 It has been nearly three weeks since we brought our Fur Daughter home, although I’ll admit it feels like MUCH longer!! Don’t get me wrong, we love our little girl, but raising a puppy is tough!

First, let me tell you the whole story about how/why we chose Mavis…

We’ve known for a while that we wanted a dog and contemplated the idea of adopting vs. buying purebred. But Mavis was somewhat of an impulse decision.

We met her brother at a 70th birthday party the weekend before the Canada Day long weekend and fell in love!! Transylvanian Hounds were nearly extinct in the 60s and therefore are a pretty rare breed. They look kind of like skinny Rottweilers with floppy ears and I love their black and brown colouring. 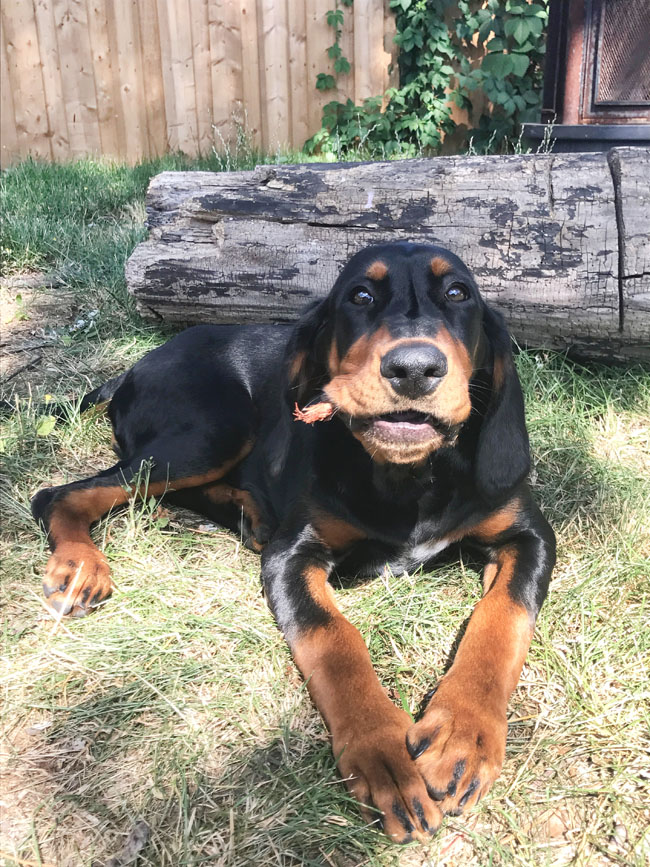 We had planned a trip to a friend’s cottage up North for the long weekend, and knew that the breeder was somewhere in the middle. We decided to stop on our way to look at the three remaining female puppies. Our original plan was to take the weekend to decide whether or not we wanted one. However, the idea of having a furry companion became much too exciting and we both knew before even seeing any of the puppies that we were probably going to bring one home.

Saturday arrived and we fell in love with the little girl that loved water. Seriously…the breeder turned on the hose and we watched as Mavis ran over to play with it. It was during this moment, that we knew she was going to have a great personality. We put a deposit on her that day and went off to enjoy our cottage getaway. 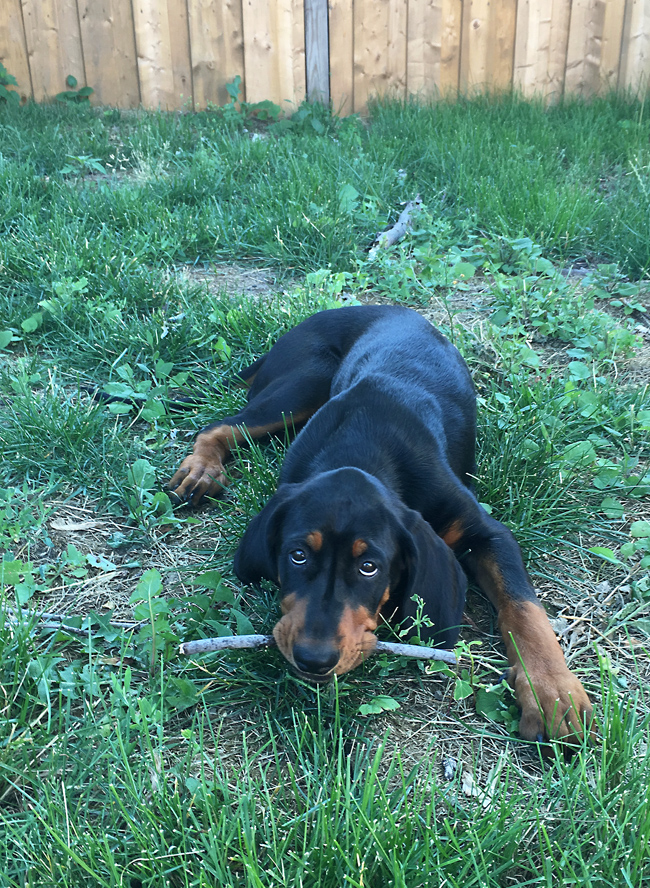 Now, I don’t want to sound like we were totally unprepared, because we weren’t. We made sure to have a crate to bring her home in on Monday (I was very adamant about making sure it packed into the car with all of our cottage necessities). I bought a collar (which ended up being too small for her), a leash (which we lost within a day) and a stuffed animal for her to cuddle.

So far she has been pretty good. We’ve been experiencing some accidents inside the house, which has surprised us because the first few days were totally accident free. She also wants to chew absolutely everything!!! Thank goodness we didn’t name her Nova like we originally wanted to because we say ‘NO’ roughly 100 times a day.

Ps. The name Mavis was inspired by the movie Hotel Transylvania! 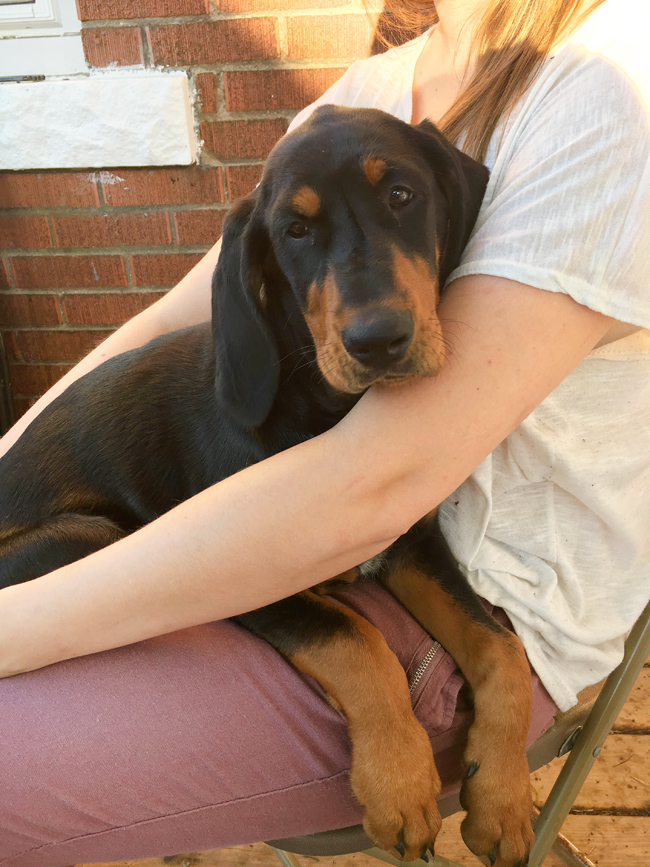 Aside from these typical puppy tendencies, training is going well. She knows how to sit and is learning lay down. She walks fairly well on a leash, only pulling when she reaches the end of our street again and her nose catches a whiff of home.

She’s super social and loves playing with other dogs. She’s also pretty chill in general, which I LOVE! When she is tired, she’s the biggest blob ever and will let you play with her jowls, rub her belly, tie her ears in a knot (just kidding…they’re not quite long enough for that) and tickle her feet. She’s also a huge suck and loves to cuddle.

But life is certainly different with a dog. I imagine it is very similar to having a baby. Having a shower is stressful if she’s left out of the crate because she’s sure to get into something she shouldn’t. She loves to drag my bath mat around the house and nearly took down my shower curtain one day.

Getting ready in the morning takes 4x longer because I’m constantly interrupted by her chewing a shoe…or the couch…or her food dish.

Even eating a meal in one sitting can be a difficult task.

We’re lucky that I work from home three days a week, otherwise I don’t think we could have gotten a dog. Making sure someone is home for her at a decent hour so she’s not left in the crate for too long is tough just two times a week. I couldn’t imagine having to worry five days of the week. 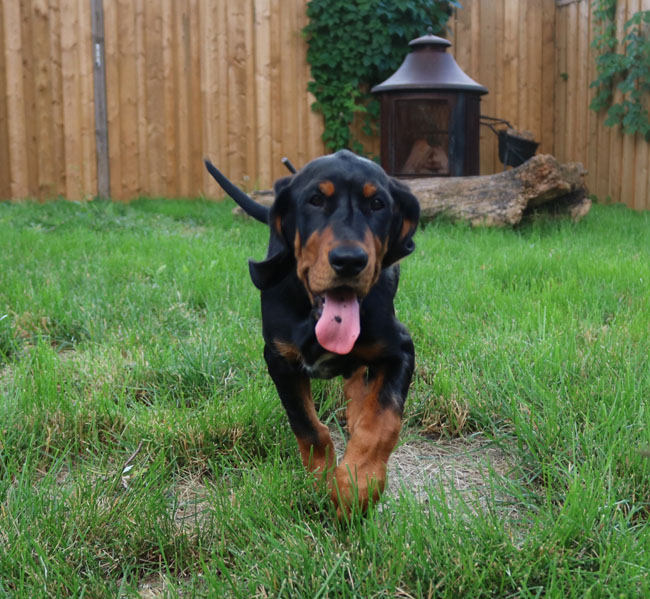 Having a romantic or intimate relationship is even difficult. We’re trying to avoid being simply “babysitters that live together” despite our new responsibility. At first we felt guilty for putting her in the crate when it wasn’t totally necessary. But over the last couple of weeks she has come to love her crate and now we don’t feel so bad. It’s a work in progress that we’re still trying to figure out, but I’m sure will get easier as Mavis’ behaviour gets better.

Despite the heacahades…I LOVE HER!

It’s amazing how quickly you can fall in love with a pet. Despite all the little flaws, I love her so freaking much!! I look forward to coming home and playing with her on the days that I do go into the office. Seeing how excited she gets when she sees me is one of the best feelings in the world!

In the end, I am so happy we got a dog!! After all the hard work and persistence, it’s totally worthwhile. I can’t wait to see what she will be like when she grows up.