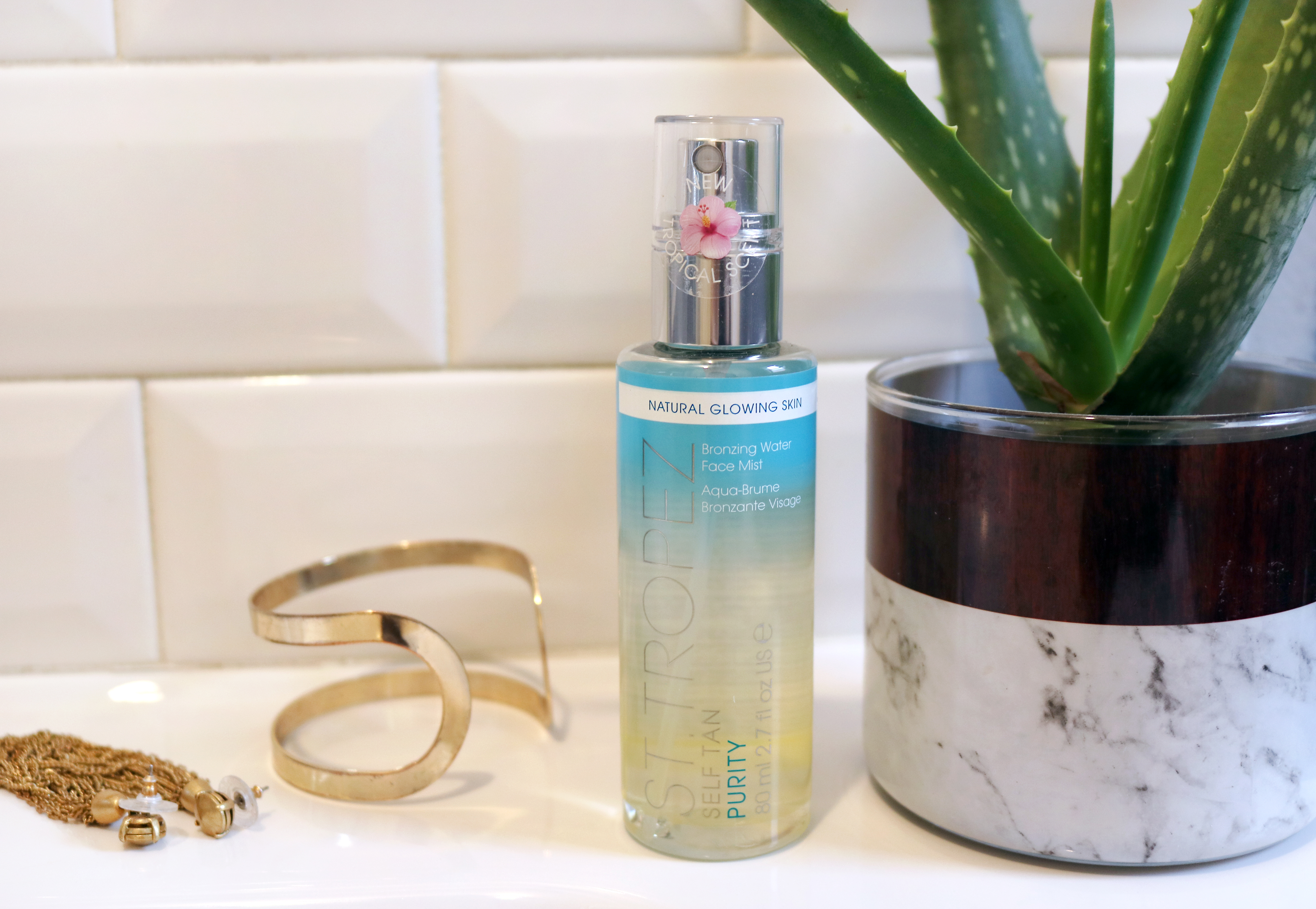 Let’s be honest…we live, eat and sleep in pants, turtlenecks and scarves from November – April. Dang those cold temperatures! It’s pretty much impossible for people to see (or believe) how tanned our skin is. Which makes the St. Tropez Self Tan Purity Bronzing Water Facial Mist (could the name be any longer?) perfect for the winter months. It’s meant for the face (aka. the only parts of our bodies exposed to human interaction when it’s cold outside) and creates the illusion of tanned skin, despite the rest of our bodies being pasty AF. 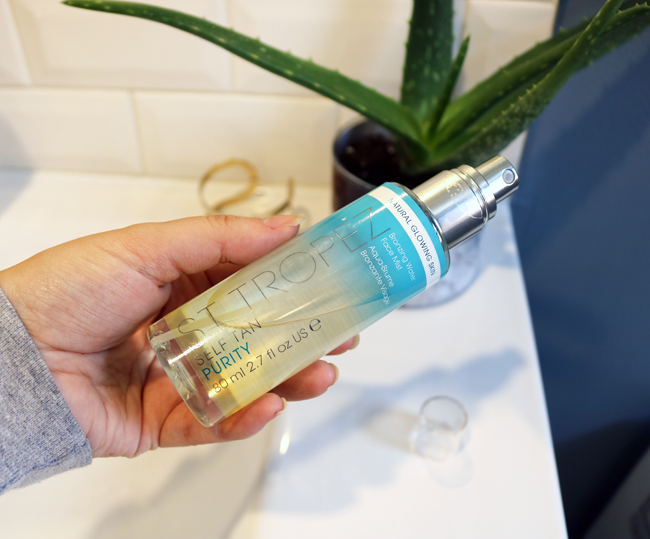 I’ve been testing it for a few weeks now and I’m hooked. I do have to admit that it took me a couple of tries to get my application technique perfect. The first time I held the bottle too far away and barely coated my face. The second time I concentrated far too much on my forehead, making my faux tan a little uneven. But for the most part I haven’t had any problems with weird spots or streaking, and it doesn’t seem to go blotchy as it fades.

The mist is really, really nice. It’s fine and feels super light when it hits the skin. The spray pump is also easy to press and control. I’ve learned that you don’t necessarily have to hold the bottle a metre away to coat the skin. Which is something I’ve become accustomed to doing with most facial sprays. Instead, I hold it a little closer to ensure the mist actually hits my face. I also use long…strokes, if you will (like using a spray paint to coat a piece of furniture) to ensure all areas are treated evenly, including down my neck. On average I think I use 6-10 pumps to cover my face. 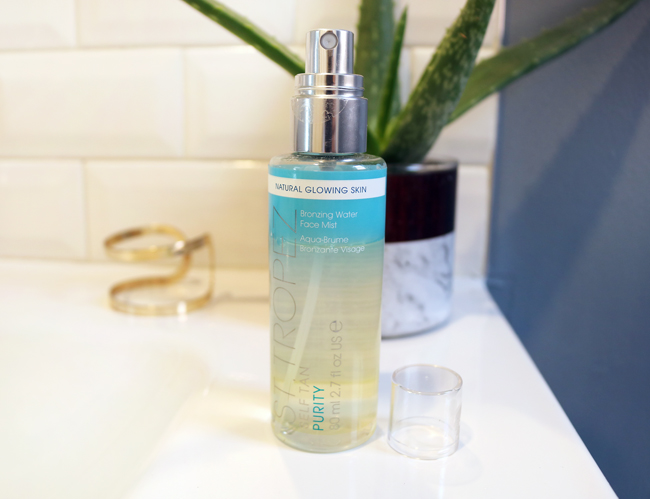 The tan developes within roughly six hours and looks quite natural. The colour is subtle and has never made me look orange. I have a feeling this will only work for those with pale skin, however, as the difference is understated. It’s noticeable on me because my face is basically white. But anyone with deeper skin tones may not see much of a change.

It says it can be used under or over makeup, but I personally don’t think it’s the best for over makeup. It can cause certain products to break up and look a little splotchy. Instead, I opt to use it at night before going to bed. There’s no need for rinsing, so when I wake up the next morning, my skin looks glowy and golden. It lasts for a few days, and can be boosted with a few extra spritzes if the colour seems to be fading. I also haven’t had any issues with it transferring to my bedsheets, which makes me believe it would be safe for daytime use and wouldn’t transfer to clothes either. 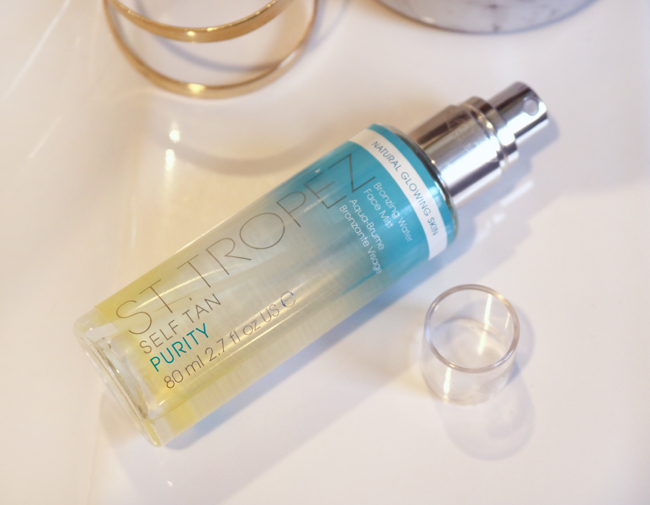 It’s tropical scented with fresh green mandarin water, and while it does smell nice, the tanner fragrance, is notably in the background. I don’t mind it, but it should be mentioned for anyone sensitive to smells.

Now, I tried to get before and after photos but I feel as though we haven’t seen proper sunlight in daaaaays. Every attempt to do so failed. There would have been some serious photoshop involved if I used any of the photos I shot, and that just didn’t seem right. You’ll just have to trust me that this stuff works. It REALLY works! It’s absolutely perfect for winter and faking a tan. But again, the colour change is slight. It’s a product I love because I have quite pale skin, but it may not work as well for others.

Disclaimer: The product mentioned in this post was gifted to me as a PR sample, however all thoughts and opinions are 100% my own and honest.

My favourite thing to do right now is use lipstick

I’ve been really slacking with my blog writing l

In desperate need of a haircut. 💇🏻‍♀️

It was all yellow. 💛 Which of these fives looks

I’ve been having a blast playing with this $16 @

You are free to slow down.

Just because we can’t go to a spa right now, doe

I was determined to create a look using this yello

With highly pigmented shades that are buttery smoo