A 30th birthday is a big milestone. It should be celebrated well and in a way that will be memorable for many years after. But I’ll be honest…planning anything can be exhausting. It makes my brain hurt! And I know I’m not alone when I say that.

Which is why as Dev’s big 3-0 approached, I became slightly anxious trying to come up with a fun idea to celebrate. I threw him a surprise party for his 25th, with help from family and friends that went super well. But HOLY HELL it was a lot of work! And I took him to Chicago for his…26? 27? So I feel I’ve done well over the years…

But I wanted to make sure he rang in a new decade with something different and special. Which is why when I stumbled on a Canadian company on Instagram called Guess Where, I hopped on the idea of having someone else organize a celebration for me. 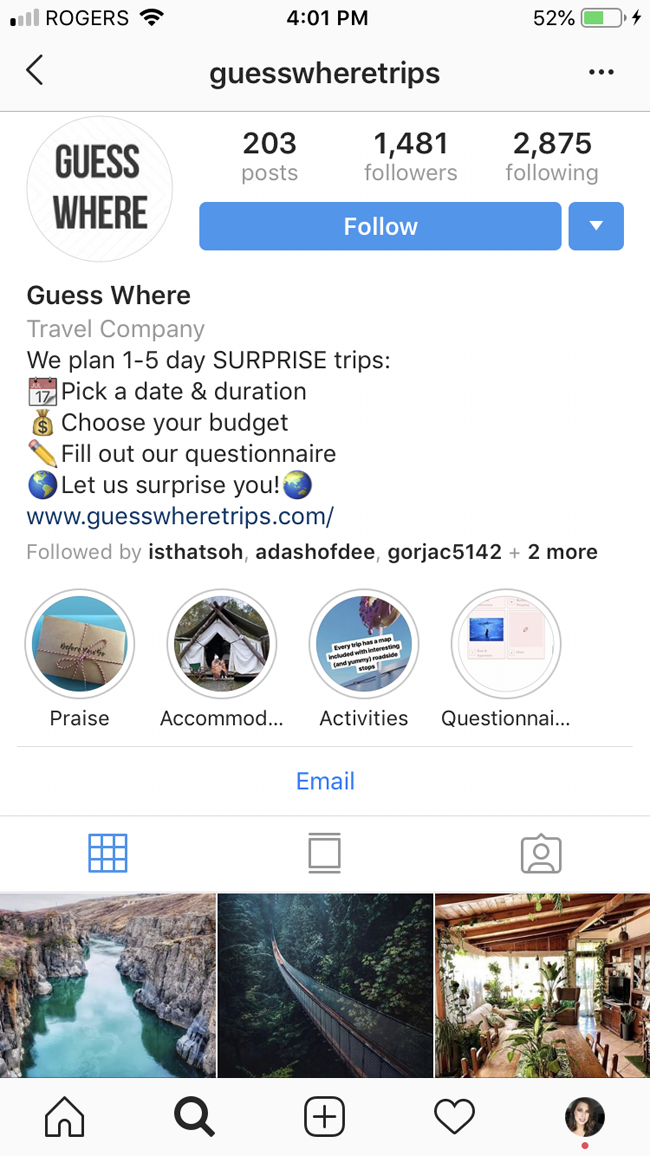 First you pick a budget and a duration. I chose the one-day road trip for $55. But there’s also the option to do an overnight trip from $200 per person, and a flight + hotel getaway from $1060 per person.

Next you fill out a questionnaire that will include the date you wish to depart and how long you would like your road trip to be (I selected 12 hours). It will also ask about the types of things you would like to see/do during your adventure including hikes, wineries, historical attractions, haunted locations and more. There’s even a question that asks if you’re bringing a dog!! Which I thought was super cool because it meant we could bring our sweet Mavis along for the ride.

Another element of the questionnaire that I really appreciated was having the option to name of areas we DIDN’T want to visit. For example, I wrote down Niagara Falls, Sauble Beach and Grand Bend…all locations we’ve visited many times before.

A week or so after the questionnaire has been completed, a package arrives in the mail. Inside it includes a pile of brown envelopes with the prettiest calligraphy labels on the front. One reads ‘Before You Go‘, which can be opened immediately. The others read ‘Clue #1‘, ‘Clue #2‘, etc. and are meant to be saved for the day of the trip. 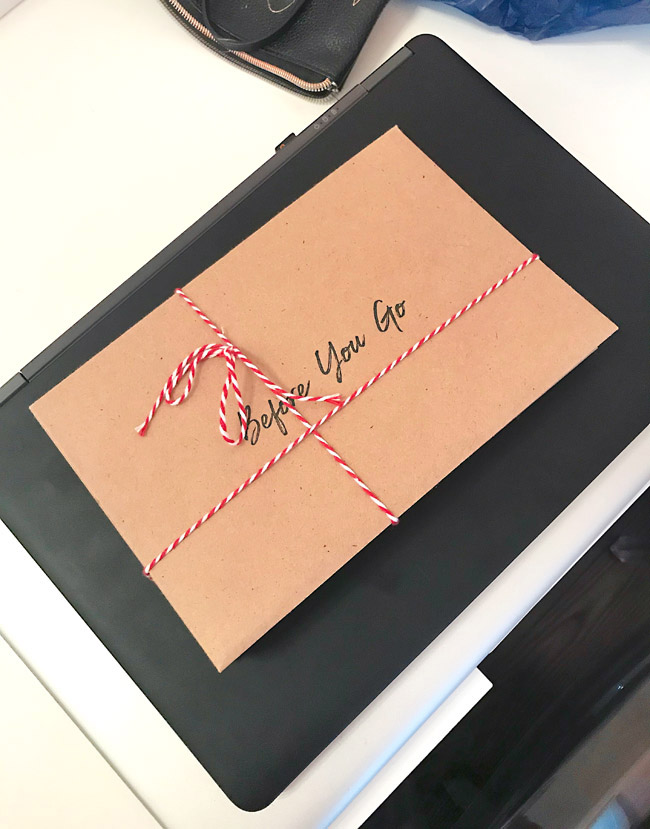 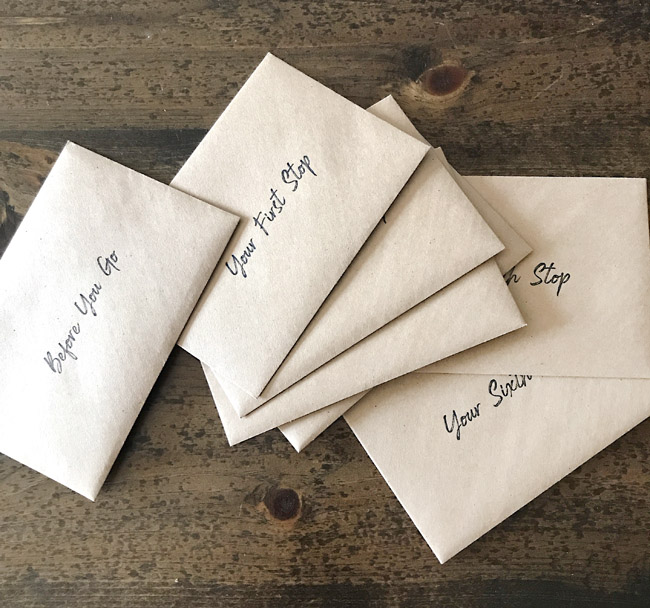 I was pretty tempted to take credit for the package when Dev first thought I had gone to all the trouble myself to hand-write each letter. But I was also proud of myself for discovering such a wicked (did I mentioned…Canadian?!) company, so I fessed up.

Our Guess Where Trip

Let me first start by saying we had an AWESOME time!!

Our first envelope contained a puzzle that when pieced together revealed the address for our first stop. Cobourg Beach. Where’s Cobourg Beach? I thought the exact same thing at first. My GPS revealed that it is about 95km east of Toronto, past Bowmanville and on the way to Belleville. 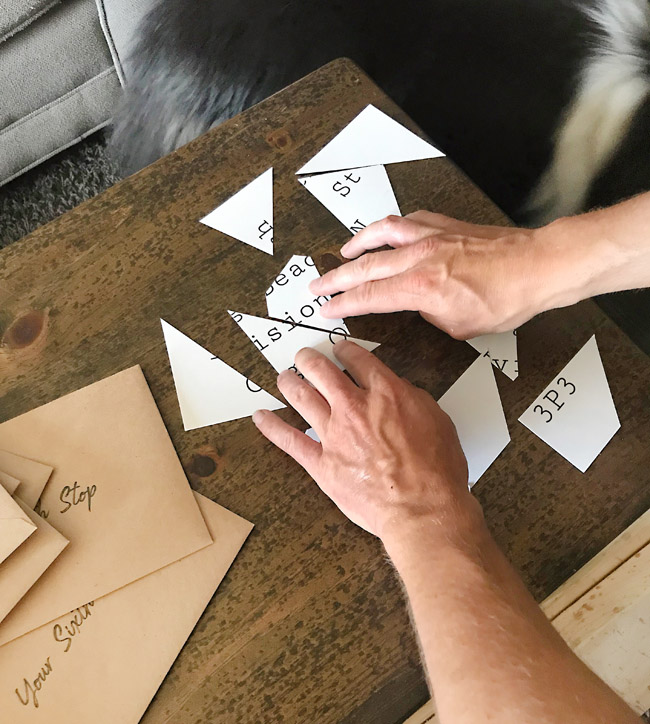 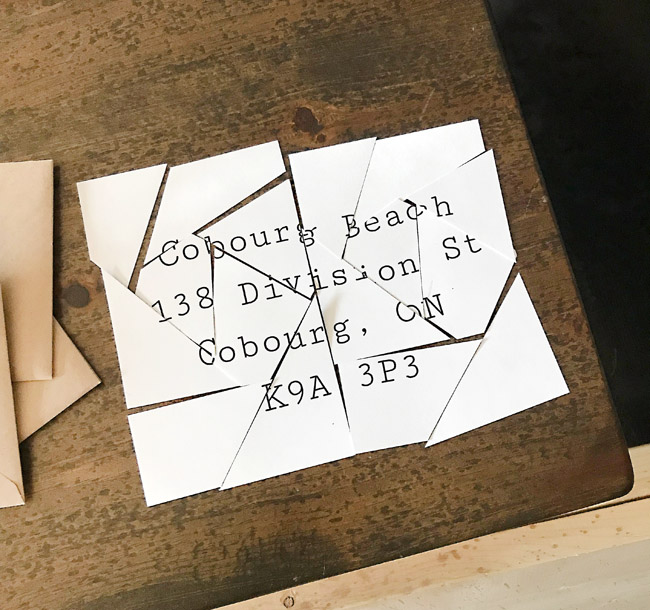 We were pleasantly surprised to find a beautifully maintained beach that wasn’t too overcrowded with sunbathers. Unfortunately, we were not able to go on the sand or in the water because of our choice to bring the dog. But we still enjoyed the views, breeze, and small town feel. 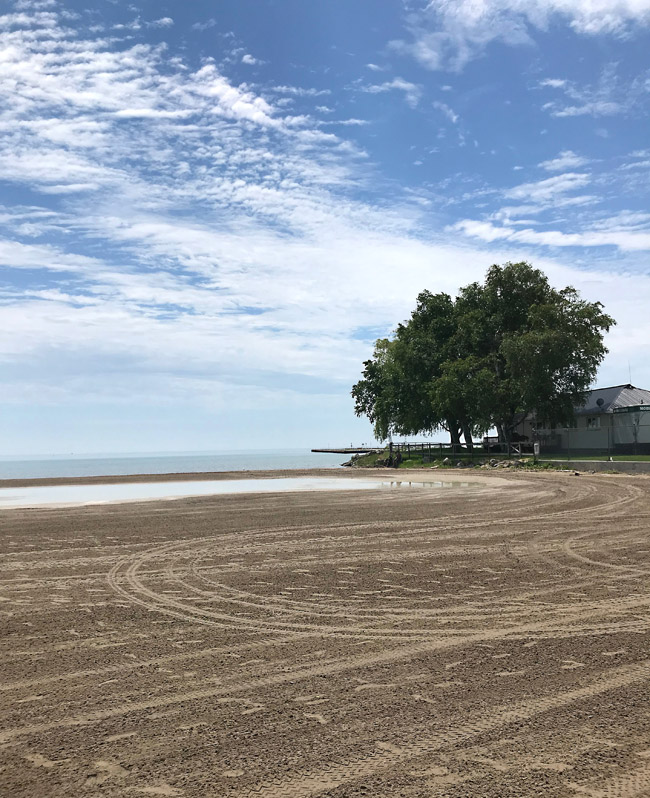 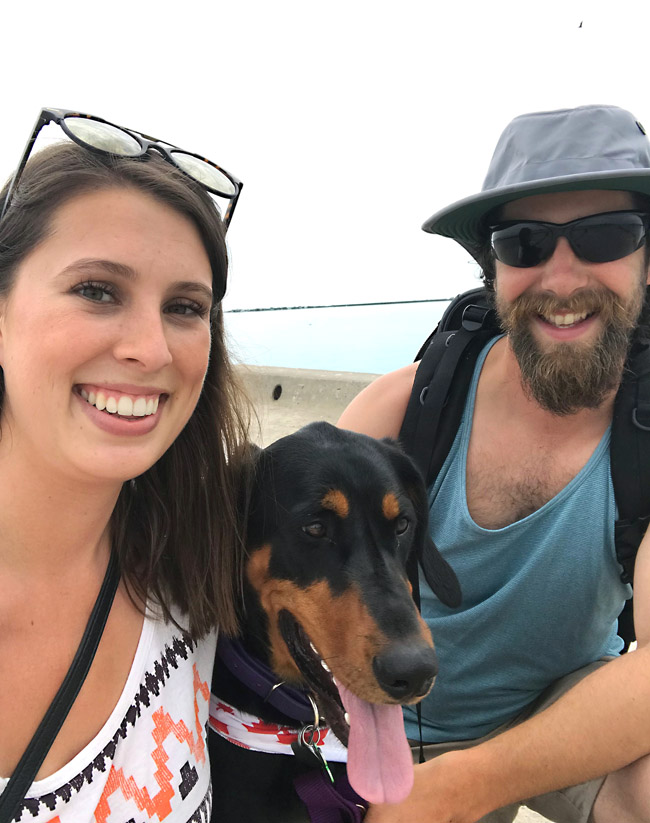 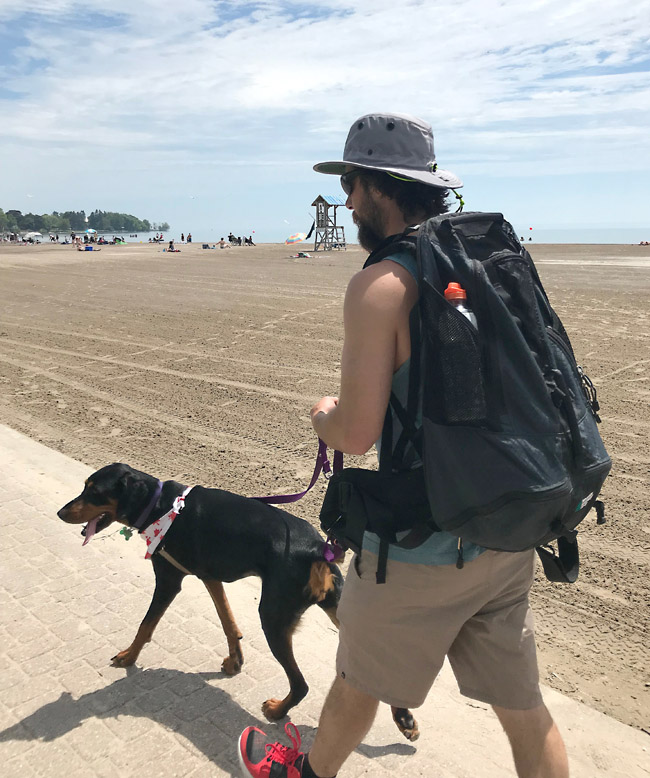 Our next clue took us to a couple of benches along the Cobourg Beach boardwalk with poems engraved on them. We had to write down both poems and unscramble certain letters from the words to determine our next destination, which ended up being The Big Apple! 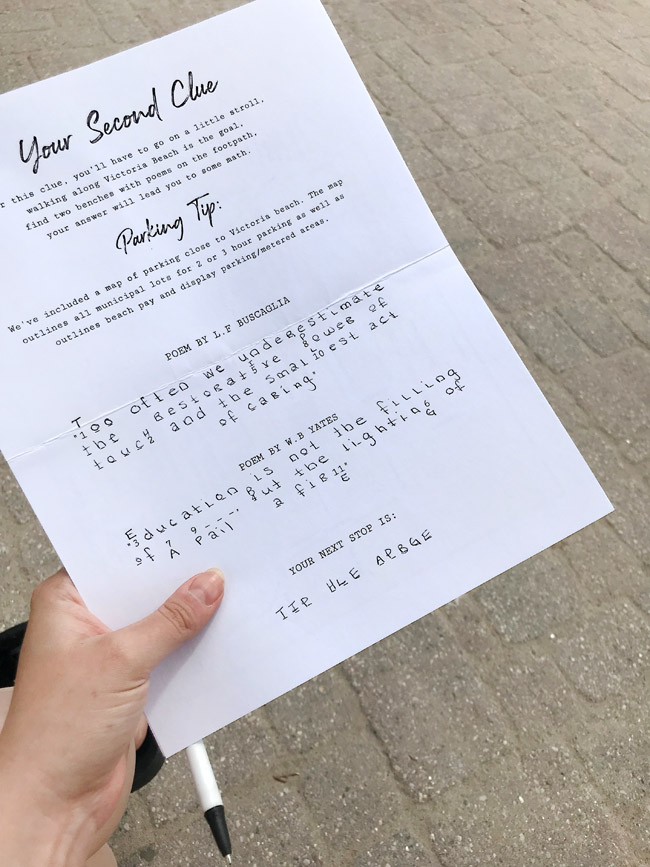 I’ve driven by the tourist spot many times but never actually stopped. Again, we were hindered by the dog and had to take turns going inside to explore the many baked goods and apple themed food items. But we picked up a loaf of their famous apple bread (which I made a grilled cheese with the following day and OHHHHH MY WORD it was good!) Mavis also met her first donkey! It turned into a love-hate relationship real quick! And we couldn’t miss the opportunity to take a family photo with the red jolly giant. 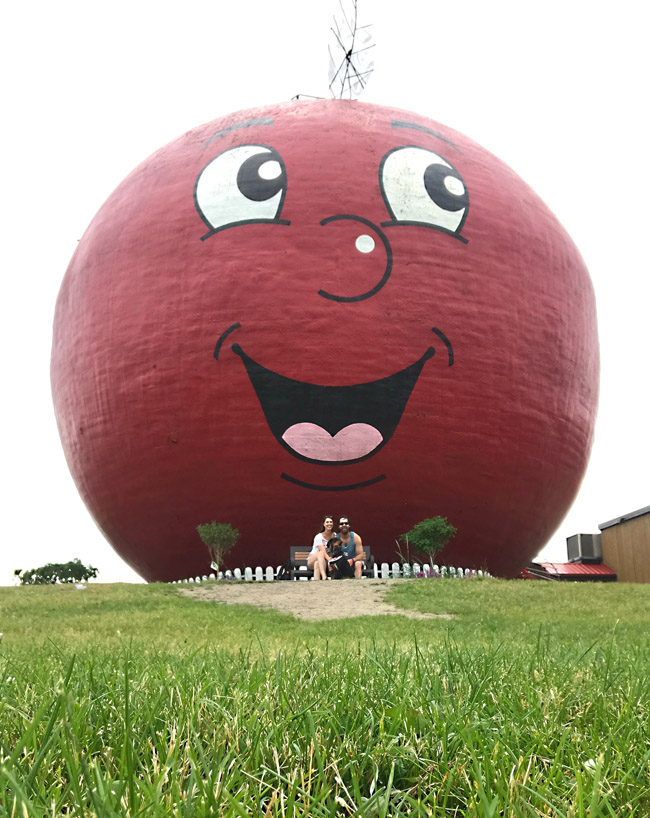 At this point it started to drizzle, so our time spent here was somewhat short, but it ended up being a good thing as we were beginning to run out of time. It was 2:30PM and our next stop was in Prince Edward County, which has A LOT of wineries…all with early closing times. We REALLY needed to get our butts in gear if we wanted to partake in any wine tastings.

How did we know our next stop was a winery in PEC? Well, Clue #3 involved us doing a little math with the distance to certain cities around the globe that was posted on a signpost outside The Big Apple. Thank goodness for cell phones and calculators!! 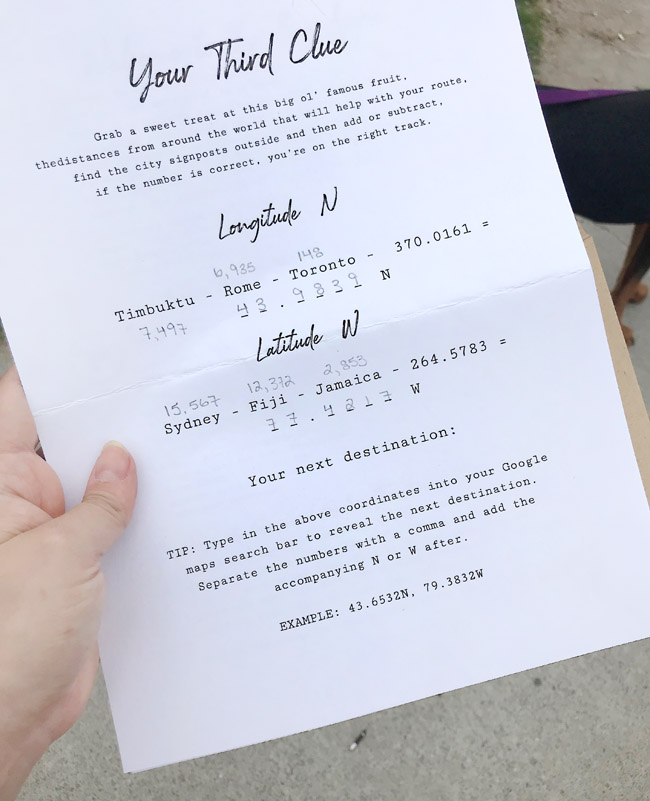 The equations gave us the longitude (am I the only one that can’t pronounce this word properly?) and latitude of our next destination. The coordinates gave us directions when typed into Google maps, but it didn’t actually tell us where we were going. When we zoomed out, we could tell that it was Prince Edward County, and one could only assume we’d be visiting a winery in Ontario’s current most popular wine region. 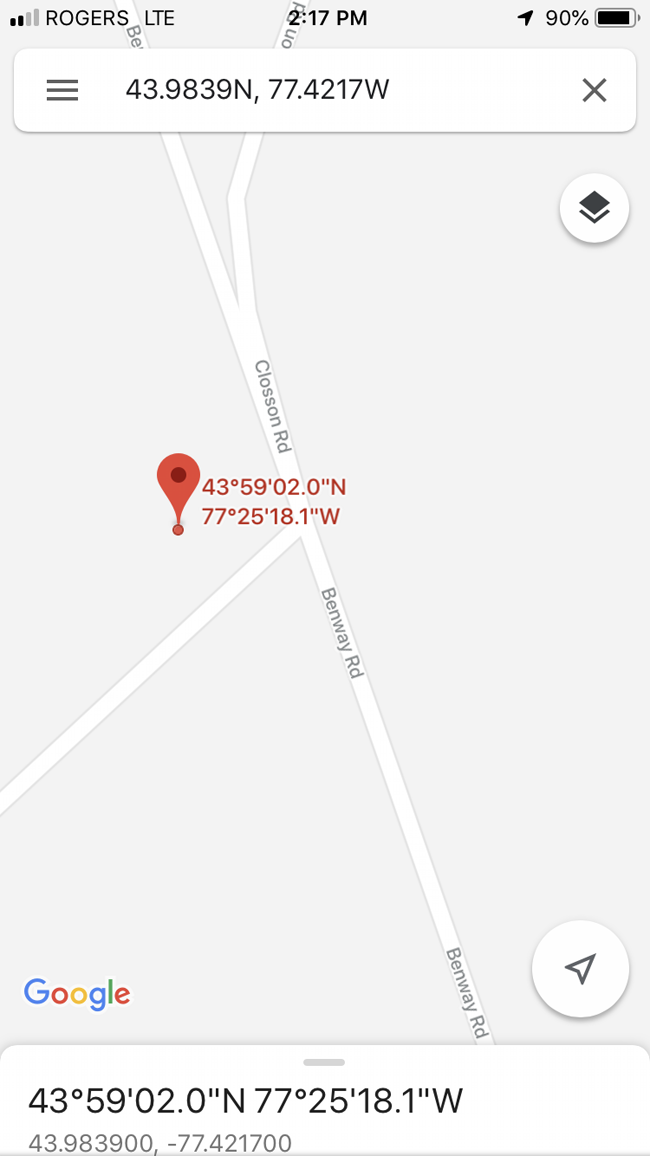 The next clue required us to drive down a road lined with all different kinds of wineries to solve some riddles. I’m not going to lie…this one stumped us at first. We actually drove down the entire road without getting any answers, so we had to turn around and try again.

Once we determined the answer and our next destination (The Drake Devonshire Inn) we decided to stop at one of the wineries for a snack break. As suggested by our road trip planner, we went for the picnic basket from Grange of Prince Edward County Vineyards and Estates Winery. It came with meat, cheese, butter tarts, pepper jelly, mustard and the most delicious pickled beans. 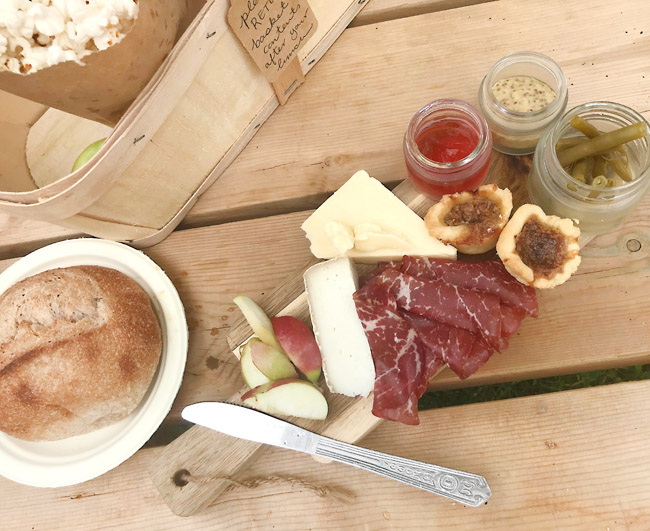 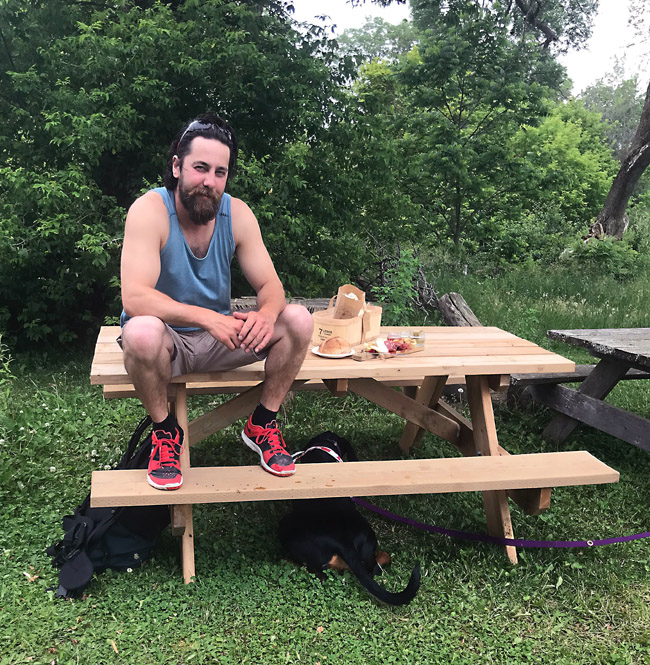 By this point it was 5PM and most vineyards were closing. Even though our next stop should have been the Drake Devonshire Inn, we decided to break the rules and go to one place not on our itinerary. I’ve actually been to The Drake in PEC before and I didn’t think it was too dog friendly, plus with a 3-hour drive ahead of us to get home, we knew we had a decision to make. Continue with our road trip and get home super later, or call it quits and save the rest for another day.

We stopped at a tiny vineyard named Hubbs Creek Vineyard that we had spotted during our drive. It was basically the only one in the area that was open as late as 6PM. The owners were so warm and welcoming, and even invited Mavis inside when it started to rain. We chilled here until closing and then hopped in the car again to head back to Hamilton.

I’m already planning to take another Guess Where trip with my Mom in August, so I guess that’s a sign that I enjoyed myself. Plus I’m currently hammering away at my keyboard with so much excitement to share this idea and company with you! That’s probably another sign that I was impressed and had a great overall experience.

In case you didn’t quite catch it…we didn’t make it to all of our destinations. It’s no ones fault but our own, as we departed home late (9:30AM…despite being advised to leave at 8AM) and we decided to go on a Friday of the Canada Day long weekend. Inevitably, we got stuck in traffic going to pretty much every destination.

We were told our trip would take roughly 8-9 hours, depending on how long we spent at each stop. But we were definitely gone for a full 12 hours and we only made it to 3 stops! I don’t want this to be looked at as a complaint, because we obviously still enjoyed our time, but I think it’s important to note for anyone that may do this in the future. Follow the instructions. Leave when you’re supposed to, and maybe even give yourself more time than is recommended.

The good thing is that we have the envelopes saved at home and if we ever visit PEC or the surrounding areas again, we have a variety of things to see, places to visit, activities to do and food to eat.

I personally would also leave the dog at home next time. While it was fun to have our little fur ball join us, we weren’t able to fully enjoy the trip. 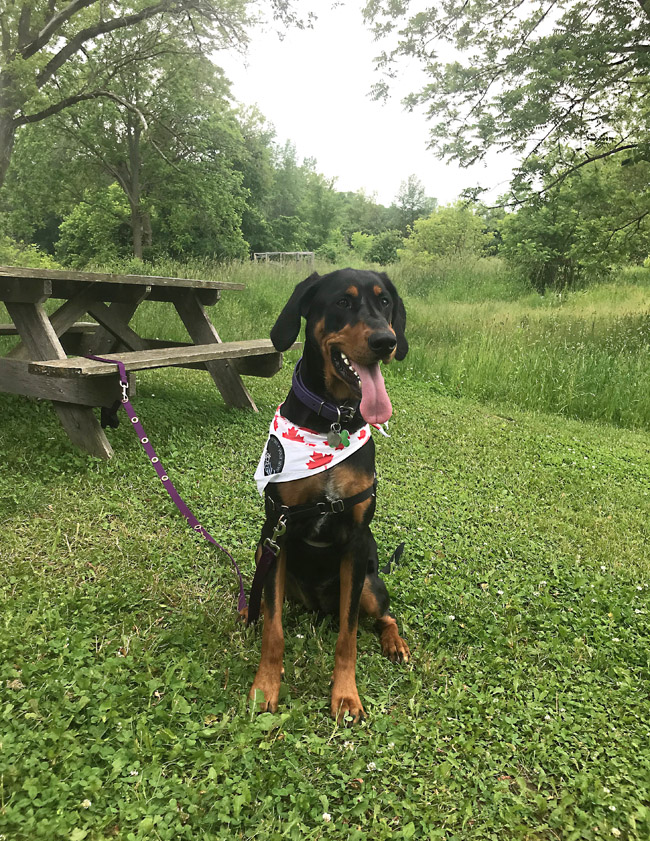 Everything is extremely well thought-out. There are maps with suggested parking spots. There are facts about each stop, along with recommendations for what to do or eat while you’re there. Plus each destination’s business hours are noted, which was super handy for us to determine how much further we were going to be able to go on our trip and how much time we had in between each stop. 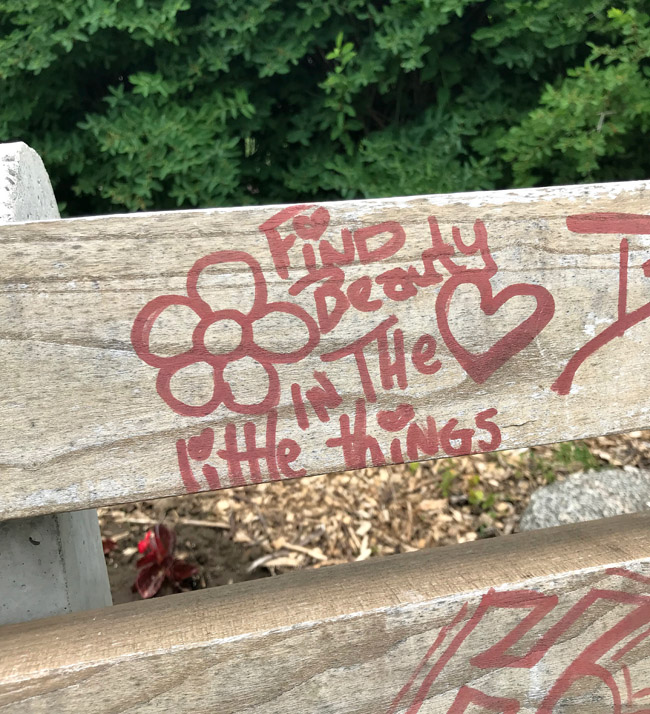 Why You Should Do It Too

I honestly feel that more people should know about Guess Where and I highly recommend taking advantage of their services if you’re looking for something different to do. Especially if you’re open to giving up control, which I know can be hard for some, but I promise it’s liberating and exciting. It’s also a fun way to explore different parts of Ontario and spend some quality time with a loved one on the road.

I’ll admit, we felt like idiots a few times. The clues are not tough. But they can be tricky. We definitely had to problem solve a couple of times, and double-check our numbers to make sure we were on the right track. However, it was so satisfying to solve the clues!! We both felt accomplished and it was an added element to our road trip that felt exciting. I also think it’s an element that would be enjoyed by children and families.

Many people have said “I should do that for my mom’s birthday!” or “Maybe grandma and grandpa would like to do something like that.” It’s such a unique and intriguing idea that can appeal to anyone and any generation. Which is why I think more people should know about the company.

So what are you waiting for??? Book your trip with Guess Where today! And be sure to tell me all about your experience if you do!

#FlashbackFriday to over two months ago (I’m sor

Two months old and Titan’s rocking the hottest b

Are you shopping the @sephoracanada Holiday Saving

To infinity and beyond ❤️ #HappyHalloween

Thankful for this little one (who is also celebrat